It’s that time of year again.

I think Pumpkin Spice is an appropriate flavor for fall, the season when all plant life shrivels up and dies.

I always figured the traditional narrative of Thanksgiving was somewhat embellished, but now I have a new theory. I think the Pilgrims and the Natives probably had a peaceful relationship, up until one of those Massachusetts Mayflower fucks decided to make this monstrosity.

The Pumpkin Spice Latte is one of Starbucks’ most popular seasonal items. Over 20 million units are sold every year which, if stacked on top of each other, would still not reach Howard Schultz’s ego.

The Pumpkin Spice Latte tastes like a melted wax candle. The bitter, earthy overtones are reminiscent of overly gentrified dirt. It leaves you with a lingering aftertaste of spices, like doing the cinnamon challenge, except instead of violently heaving up dry powder you just feel bad about yourself.

The botanical classification of pumpkins also technically makes pumpkin spice lattes a form of squash bisque, meaning you idiots have been drinking soup this whole time.

You might think I’m being critical towards Starbucks over some personal vendetta, but it’s quite the opposite: I love Starbucks. Some of my best friends are baristas. But just like when my friend Billy fucked up the seating arrangement at my 8th birthday party, some people gotta be put in their place.

The marketing for Pumpkin Spice Lattes is almost as terrible as the drink itself. Given my readership I’m probably not in a great position to make this argument, but come on:

I think I’d be more accepting if the Pumpkin Spice Latte was renamed to “Orange Drink” because at least then there wouldn’t be a pretense of it tasting like anything. 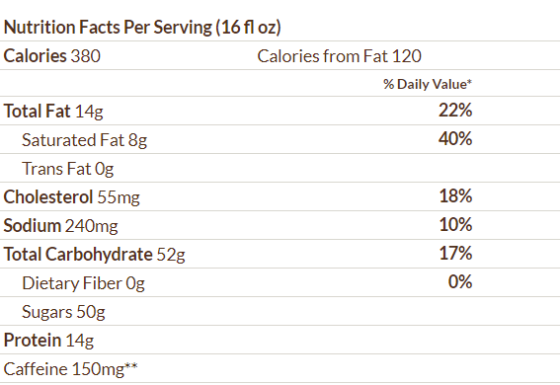 In fact, here’s a list of rough nutritional equivalents you could consume instead:

Look, Starbucks, we get it. You won. Your stock is up 64% YoY, half of America is addicted to your product, and you’ve managed a hostile takeover of every coffee shop contained inside another building. So I’m begging you, pslease, just stop.

(Oh, and the iced version sucks too.)

I would strongly encourage everyone to consider signing my petition to abolish spICE. Link here.

Good for: Those sweet sweet rewards points, the state of Illinois